My experience with cancer

Last summer I asked my GP for HRT after watching Davina McCall’s programme on the menopause. As we talked on the phone and she took my recent history, she was concerned about the spotting I was having. She called me in for an examination, and then followed blood tests, an ultrasound (which revealed endometrial hyperplasia) and a very uncomfortable hysteroscopy (top tip: you can have local or even general anaesthetic – you don’t have to suffer the pain it may cause, though some women don’t suffer any pain) and a biopsy.

I could see a large white mass on the screen, and they suggested that it might be a fibroid. I wasn’t surprised by this as my mum had had fibroids in her early menopause. And we (my husband and I) had read up about hyperplasia and it was very treatable.

So, when I got a call to go and see the doctor who had done my hysteroscopy, I wasn’t thinking about cancer at all. As he said the words I had to ask him to repeat it. I’d not taken anyone into that appointment with me, because I hadn’t noticed the invitation to do so on the letter I’d been sent. So I sat there, trying to take in what they were saying to me, and to this day I’m still not entirely sure whether I heard them correctly in some respects. As we drove back home I was in shock. And I honestly think I remained that way until much, much later.

The next stage was to have a CT scan to see if it had spread at all, which, looking back, was no real issue as a procedure, but given that I’d never had one done at this point, I was scared and apprehensive. My scan included the whole of my torso because we were also checking the lymph nodes in my chest, and I had contrast dye as part of the procedure – a very strange experience but not at all uncomfortable.

The next appointment confirmed that there was a mass in my endometrium, and it looked contained. There didn’t seem to be an issue with my chest lymph nodes, but there was a mass in my right breast, so they arranged a mammogram which I had just two weeks after my total hysterectomy with bilateral salpingo oophorectomy. At this appointment I also found out I’d be having the hysterectomy just a few days later. I’d received my diagnosis on September 1st and I had my surgery on September 20th – it was all a huge whirlwind, not enough time to take in the news at all. 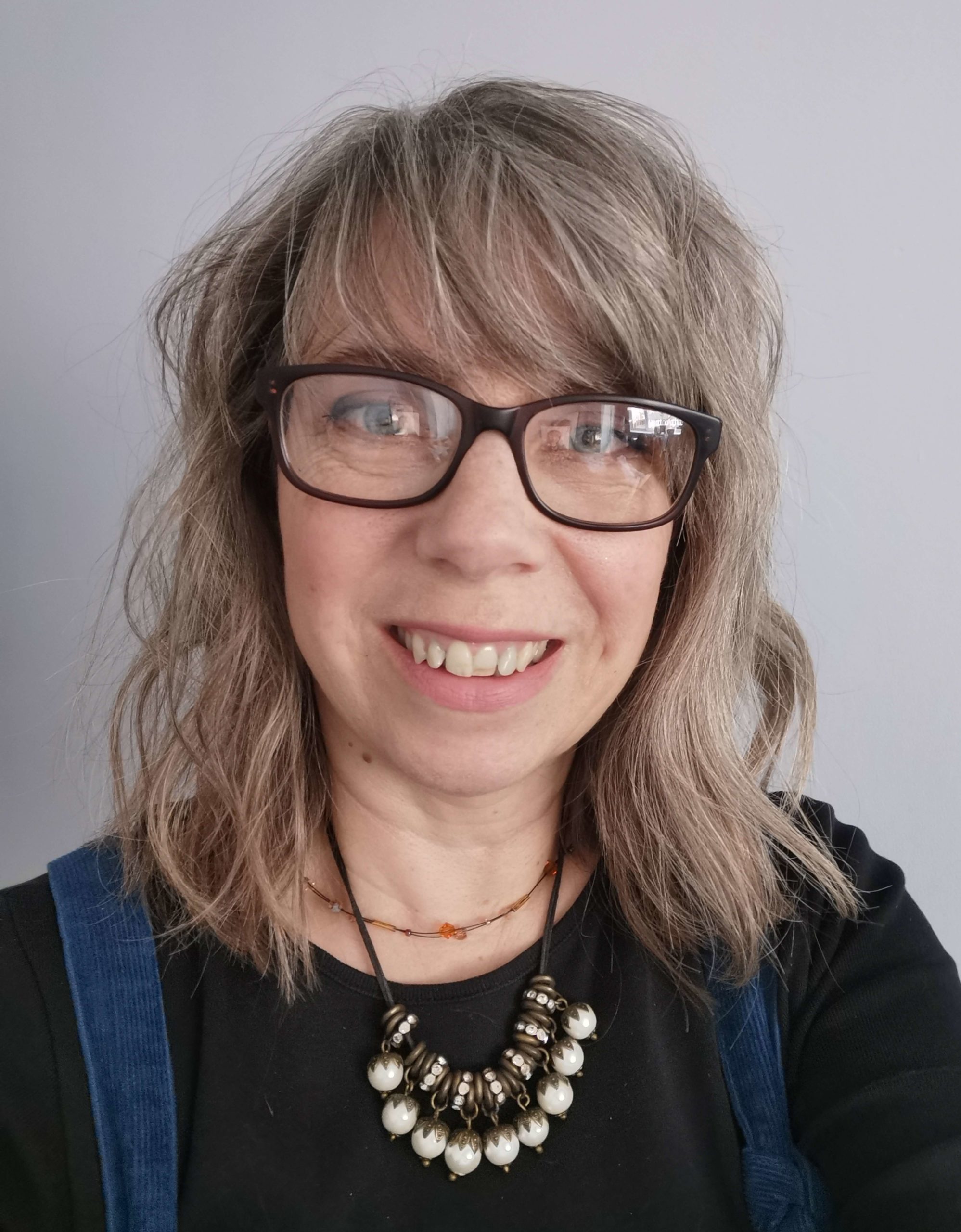 Even though I’m hugely grateful for the speed at which I was diagnosed and treated, one thing I found disconcerting was the way in which I was not really included in the decision making. I did have a choice to refuse the treatment, and other options were briefly talked about, but it was only through my husband’s careful reading and talking through with me all my actual options, that I was able to be somewhat at peace with the surgery.

Something else that wasn’t really talked about, and that I have grappled with since, is losing my womb. There seemed to be a sense of fait accompli, I had cancer there, and I was menopausal, so take it all out. Why would I want anything else? And in the end, I did choose surgery for myself, but I had a real sense of loss with regards to my womb.

Like everyone, I was assigned a clinical nurse specialist, and I talked through some things with her, but she didn’t seem to get how I felt about losing my womb, and that led to me not really talking to her much. She was professional and good at her job, but I needed something she couldn’t give me. I’m very grateful that I was already speaking to a psychologist, who had also had a lot of experience helping people with cancer, and my conversations with her have really helped.

Back to my cancer timeline, and my surgery went well, though not unexpectedly it took me quite a while to fully come round. I’m also very grateful that the catheter wasn’t left in after surgery, and I was able, eventually and with help, to get to the toilet in our small bay.

As I mentioned earlier, only two weeks later I had to go for a mammogram and I’m exceedingly grateful for the use of a wheelchair as it would have been a very long walk, way before I was ready for that much walking. Thankfully, it turned out to be a cyst which they drained straight away – ouch!

Another week later I was called for a follow-up appointment for the results of the histology after surgery. Even though they’d called me in, rather than sent me a letter, I again wasn’t prepared for the news they gave me. Rather than the cancer being fully contained within my womb, it had started to grow into the neck of my womb, and so now I was told I’d need 25 radiotherapy treatments and 3 brachytherapy treatments. I remember repeating, “5 times a week for 5 weeks?” with some surprise!

It was during the weeks of radiotherapy that the shock of my diagnosis finally sank in, and after the first taxing couple of weeks I settled into the routine of it all. The journey there was 45 minutes, including crossing the Humber Bridge, paid for by the hospital. Though there were many days when I was tired or fretting about making it to the loo in time, the journey was actually a blessing, and sometimes simply beautiful.

What wasn’t beautiful was the ceiling of each of the treatment rooms I found myself in, and sometimes the music that was being played during treatment. It was coming up to Christmas and one day the cd playing included the Hallelujah Chorus – not exactly the ideal choice for having your radiotherapy treatment to.

The other thing I really didn’t enjoy about the daily grind, apart from trying to get bladder full enough and bowels empty, was the hard board you have to lie on whilst being treated. My head had a nice cushion, and the legs and feet support were fine, but my pelvic bones did not enjoy that hard board.

Finally, the day came for my last radiotherapy treatment, and I rang that bell (provided by a Cancer charity) very happily, and with gratitude, after it was done. A week later I was back in the radiotherapy department for the planning scan for my brachytherapy. The team was brilliant, taking into account my needs and concerns, and later on I walked with them, much slower than them, to the brachytherapy suite, which was in a different part of the hospital. There, the bed was so much more comfortable, and that first treatment was so much easier to tolerate than radiotherapy (which doesn’t hurt at all, by the way), that I felt almost euphoric.

My treatments were on consecutive days, and the straightforward version which lasts for about 7 minutes. It was just before my third and last treatment that the nurse told me I’d never be given this treatment again because it’s so powerful – I wish she’d told me that afterwards!

Since my active treatment has finished I’ve really struggled with fatigue, and some three months later I’m still not ready to return to work. This is a part of the cancer journey that gets mentioned as a possibility in all the literature, but you just can’t predict how it’s going to go – I find that hard, not knowing how long it will take to fully recover. There are some days where I’m angry that cancer has stolen these months from me, and yet at the same time I’m so grateful that I received all my treatment so quickly and without any of the struggle that some women have, getting their doctor to listen to them.

I can’t have HRT because my cancer was almost certainly hormone driven, and so my GP and I are just starting on a process of finding out what might work for me in terms of controlling my main symptoms. And there have been other personal factors and family health that have added a lot of extra difficulties and challenges. We’re very grateful for the support of close-by friends, but especially our children, and I continue to hope for a long life where I might live out love and purpose, and have gratitude for every day that I breathe.