It all started back in December 2020. I had never had regular periods as I had polycystic ovary syndrome, so when I started a heavy period mid-December, I didn’t think that much of it, apart from thinking it was about time these periods stopped altogether at my age!

Anyhow, as time went on, I was still having a heavy period in early January. Again, this was not unusual for me for a period to last weeks, but the colour was bright red instead of the darker red, plus I had a painful left side, which was unusual for me, as I had never really had period pains.

Anyway, by mid-January I had had enough as I was feeling drained and tired and I was using so many sanitary products, I felt I should have shares in them. As it was during lockdown my initial consultation with my GP was by phone but I was asked to go down for a face-to-face appointment the same day as she wanted to examine me.

When the GP examined me, she said she felt something on my cervix, which was probably be a benign polyp and was going to refer me to the hospital.  I wasn’t really worried and waited for my appointment, which came through within days.

The consultant who examined me found the polyp and removed it there and then and sent it off to the lab but she decided whilst she was examining me that due to my medical history plus my weight she would do an endometrial biopsy. I won’t lie it was blooming painful but that few minutes of pain was worth it.  Me being me, I went away thinking that was it, I was sorted and I carried on with my life. I was really surprised to receive a letter 10 days letter asking me to go back for the results of the biopsy.

When I went into to see the consultant she was very surprised I had come on my own but I told her that the letter told me to go on my own due to covid.  I still didn’t twig there was a real problem until she handed me a tissue and then told me she had to tell me that I had womb cancer! When I heard the word cancer, my world stopped momentarily. The consultant was more concerned with how I was going to get home, could my husband come and fetch me and was I ok to drive, but all I was thinking was that I needed to get out of there and home to my husband & puppy. I think the worst part of that day was not being told I had cancer but having to tell my husband and my elderly parents I had cancer. I felt I had let them down in some way.

The next few days passed in a blur. I was sent for an MRI scan to see how far advanced the cancer was and luckily my husband was able to come with me to that appointment.   The week I was going to see the surgeon for the results of the MRI I was pinged by the NHS Track and Trace app to self-isolate as when I had been for my first Covid-19 vaccination I had been in contact with someone with Covid-19.   I felt fine but I was more stressed out that I wasn’t able to get the results as I needed to know how far advanced it was. Fortunately, I was able to do the appointment over the phone and the relief my husband & I felt to hear it was stage 1, grade 2, very early stages was indescribable. Yes, it was still cancer but it had been caught early.  It was explained to me that I would need a total hysterectomy with bilateral salpingo-oophorectomy and that it could be done by keyhole surgery.

The next stage was going for a pre-op assessment which was fine. I got to meet some of the nurses who would be on the ward after the op and I met the consultant anaesthetist, who deemed me fit for surgery.  Due to my weight (I’m classed morbidly obese), I had to wait for a High Dependency Unit (HDU) bed to be available just in case anything went wrong during the operation.

Due to Covid-19 I had to isolate for 3 weeks beforehand. It should have been 2 weeks but they couldn’t confirm the operation date. On the 8th April, I went in for my op. As I hadn’t seen the consultant surgeon face to face, I wasn’t sure what was going to happen but all the staff were friendly, caring and put me at ease from the moment I arrived. It all seemed a bit surreal if I’m honest. I met the anaesthetist, a lovely man, who was different to the person whom I’d seen before. I then met the surgeon, again a different surgeon to the one I had spoken to over the phone. I was asked if I wanted to know how they were going to do it and if I had any questions.  I didn’t have any questions, I told him he was the expert and that I trusted him.  My only real concern was being sick afterwards as I don’t react very well to anaesthesia, but he pumped me full of anti-sickness drugs so I didn’t even feel sick ????.

As I was on the afternoon list, I was asked to wait in the waiting room, where I watched tv and did crochet, which was all very relaxing. When it was time to go in, I was walked to the operating table, settled down and the next thing I remember was them trying to wake me up to tell me I was going to the ward. I didn’t come around properly until 10pm that night. It was the best sleep I had had in ages. ???? I was kept on oxygen all night as my levels were low but apart from that I had a good night’s sleep. Except for a loud-talking lady in the next bay and needing several drinks of water as my mouth was very dry from the oxygen.

First thing in the morning my catheter was removed as I had been drinking all night & my bag was full. I had my breakfast then I was allowed to go for a shower. I was so surprised by how well I felt. I wasn’t in pain and didn’t feel sick, just very tired. Once I had seen the consultant surgeon and the physiotherapist to check I was walking ok and could walk up and down the stairs ok (I’m a very fit fatty you know ????) I was allowed to go home with a bag of painkillers and anti-clotting injections.  Who would have thought you could go home 24 hours after a major operation?

I took the 6 weeks off work as advised, even though I thought in my head I could go back to work after 2 weeks, but an afternoon nap became the norm for me. Going for short walks in the fresh air from the day after I came home really helped with my recovery too. I went back to my Pilates after 11 weeks post-op and my puppy and I now walk up to 30 miles a week, sometimes more depending on the weather.

At the end of April at my first post-op clinic appointment I was told they had got all the cancer in one go and that I didn’t need any radiotherapy or chemotherapy. My husband and I were so happy. I was one of the lucky ones. Yes, I had cancer, but knowing my body and doing something about it straight away helped to catch it early.  At my next clinic appointment in July, I was discharged but under strict instructions to ring if anything was wrong or any bleeding appeared.

Since I learnt about the cancer, I have lost 4 stone in weight and hope to lose more. I have never felt so well. Yes, I have had low moments and bouts of ‘what if’s’ but that is normal.  I don’t take my health for granted anymore and I listen to my body when something isn’t quite right. 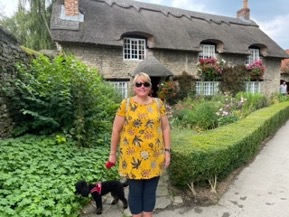