My name is Nicola and I’m 45 years old. Too young for womb cancer, right? If I had a pound for every time I’d heard that I’d be able to retire.

For many years I’d had extremely heavy periods. I had one contraceptive pill after another, then tranexamic acid but nothing helped and nobody really listened so, in the end, I just stopped asking. In my late 30s it was so bad I was wearing two night-time pads and a super tampon and I’d have to change them every 30 minutes.  When I stood up I’d pass out. I was severely anaemic and I had to take days off work because I couldn’t get out of bed without flooding, I was physically and mentally exhausted. The final straw came when I passed out at work. I came home and rang the doctors in hysterics. I was seen a week later but there was no urgency. “Women’s problems” and “you’re too young” I was told (they still say this now!). In the middle of the tests I turned 40 and a new GP joined my practice who was really supportive. I was now in the right age bracket and I eventually met the criteria for a gynaecology referral.

After three weeks of tests and scans they found a cyst on my ovary the size of a peach. We called it Maude. Nobody mentioned cancer and they even debated whether it was worth removing despite my horrendous symptoms, but luckily they decided they would. I had a general anaesthetic and my ovary, fallopian tube and Maude were removed. They also took some swabs, did a hysteroscopy and fitted a Mirena coil. Luckily, they said they had managed to save my other ovary and that I’d still have my fertility. I knew they were wrong because that was the day I started my surgical menopause. I started crying for no reason and barely stopped for a week.

Three weeks later I was back at gynae department. I had to walk through a room full of pregnant women to get to the department which always upsets me. I think they should have another entrance. I saw the nurse going into the room with the consultant and I had a feeling at this point it was bad news because I recognised the ‘specialist nurse’ uniform. The cyst was benign but I had womb cancer. All I remember from that day was how horrid the oncologist’s shoes were and how was I going to tell my family. As it happens that was the easy part – I just burst into tears and blurted it out. A month later I had a total vaginal hysterectomy. Ovary, womb, cervix and any chance I ever had of being a mum removed. I recovered well from the op and three weeks later, a few days before Christmas 2016, I was told it was stage 1a grade 2, needing no further treatment. But cancer wasn’t quite done with me yet.

Fast forward two years almost to the day. Same room, legs akimbo, we’ve found a lesion. I had no real symptoms, it was a routine ‘sign off’ examination.  A week later I had a biopsy. A few days later I started bleeding heavily and was rushed to A&E. I don’t remember much after that. I was rushed into resus, had a major vaginal haemorrhage and nearly died. Whilst I was in a semi-conscious state the gynaecology doctor on-call told me the cancer was back and metastatic, so automatically stage 4.

Another round of scans and tests, including a scary moment with my liver and they found it was contained. Not in the usual vaginal vault area but much further down in the vagina.  Another treatment plan was needed. Another consultant with terrible shoes. I had 25 sessions of radiotherapy followed by three sessions of brachytherapy and then it was time to ring the bell, the most amazing sound.  The treatment was fine and it took longer to set up the machines that the actual radioactive zapping. If I was lucky I’d have the cherry blossom room with the ‘80s disco and rock. It was all a bit embarrassing at times and I had lots of gastro side effects, but it saved my life, so I can deal with as many students looking at my bits as you’d like. The dilation therapy is also horrid but you just have to get on with it.

Long-term I’m left with a few side effects, mainly bowel and occasional urinary tract infections. I have also developed some lymphoedema in one leg and I’m forever tired, exhausted even. The surgical menopause is a nightmare, insomnia and brain fog being the worst part, but I’m here and that’s all that matters.

There’s no getting away from it but Cancer destroys you. It ruins your confidence, your self-esteem and makes you feel like less of a person, less of a woman. But it’s also life-affirming. It makes you realise what and who is important. Who will be by your side holding your hand and who will cross the road because they’re frightened to say the wrong thing. I’ve always been positive (despite being literally the unluckiest person ever) but it even took part of me for a while there. But, now I’ve passed the two-year mark I’m almost back to feeling like me.

Now I fight the good awareness fight. I’ve written a few blogs for different charities and cancer organisations. I make awareness bracelets for a few small organisations and give one to everyone who asks about mine. I was part of Helena Traill’s 100 Stories book and have recently raised money for Peaches Womb Cancer Trust by doing the swim22 virtual channel swim, despite COVID’s attempts to derail this. I continue to do what I can but I’m still working full time as a deputy manager/ nurse so sadly can’t do as much as I’d like. Cancer is just a small part of my life but a huge part of the person I am, both positive and negative. When I look back at the fear I felt five years ago and how I handled each step I’m proud to have made it this far.  I once looked at the statistics and for my age range in my diagnostic year I was 1 of 158. There are no statistics for a reoccurrence in this group the numbers are so low, so as I keep telling everyone, I really am 1 in a million ????. 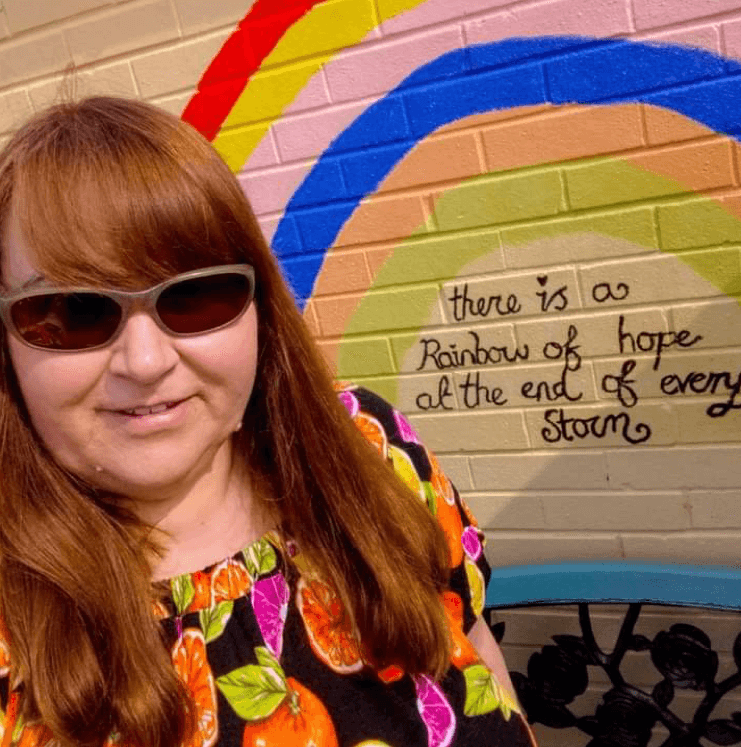